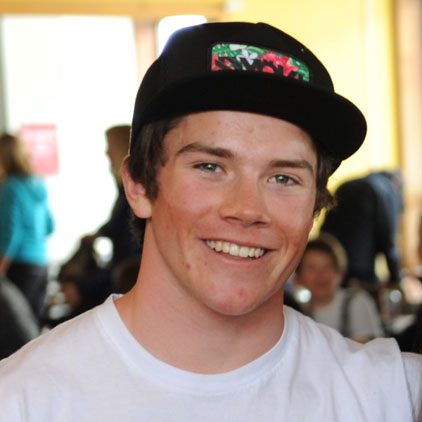 The stop at Crystal this year was amazing.  The energy, venue, and caliber of skiing was unlike any event that I had ever been to before.  Seth Klein put down the most impressive run I have ever seen, and everybody else skied incredibly as well.  The weather was beautiful, it was the best snow I had skied all year, and being able to share that experience with some of my closest friends made it a highlight part of my season.

Either in my room studying or out lost in the woods somewhere.

What can't you stop talking about?

...it's just like, dude, you get the best barrels ever, dude, just like, you pull in, and you just get spit right out of 'em, you just drop in and just smack the lip--Whaapaaa!--drop down--Sampaaah!--and after that, you just drop in, ride the barrel, get pitted, so pitted, like that

Where to start. I guess if I had to choose one thing I would want to see discrimination end and an age of mutual respect to begin. Abuse of power, violence, and most other issues with contemporary society stem from prejudice and an assumption of superiority or entitlement. If we learn to recognize our differences and connect on a human level, so much more can be accomplished. This is the type of movement that happens individually but spreads contagiously in order to reach a larger scale.

This is just one of countless issues that need to be addressed, but I feel as though this change can be used to initiate change in a number of other areas.

Something that many people might not know about me is that I lived in Argentina with my family for 5 months during the first half of sixth grade.  I went to school in Buenos Aires, travelled around the country, went skiing in a few different places, and learned Spanish.

Huge thank you to my sponsors The North Face, Völkl Skis, Smith Optics, BlueZone Sports, and Marker Bindings!  Thanks to Sugar Bowl Academy and all of my coaches/teachers for providing an environment that allows me to ski and travel at a high level while still being able to focus on my studies.  And I cannot thank my parents enough.  Also shout out to Louis Norris and Jordy Guldman.